A lot of people, when needing to use a bunch of sage in recipes, will find it hard to understand exactly how much should a bunch be, considering that each store carries sage bunches in different sizes, making things rather complicated. A lot of people also try to grow their own sage which means that their bunches will be as big or as small as they want.

So to get a better idea of what a bunch of sage means in stores, we went to a few different grocery stores and picked out one of their sage bunches. It turns out that the average bunch of sage will have a weight of about an ounce. It will usually be made of around 68-69 springs of sage.

We concluded that the best bunch for our tests would be a one once one, so we got one and went straight to the kitchen to see how would that bunch of sage translate into chopped sage leaves. Based on our findings, to fill a cup with chopped sage herbs, you will need about 2 bunches of sage. As long as you’re in the store, it will be pretty easy to weigh the sage. You just use the in-store scale. But what can you do when you’re growing your own plants and spices? In this case, you can get a kitchen scale to make your life easier.

Here’s a nice piece of information: Sage is one of the many herbs that are part of the mint family of plants. It is believed to have come from the Mediterranean region but currently, it is easily grown in the U.S. too. Sage doesn’t only have a place in the flavoring department, being one of the popular spices, but has also been used for medicinal purposes for over 2000 years, according to historians.

The information provided above should be enough for you to know how much sage you will need in your next recipe but if you still have a hard time with conversions, you can always use our converter to figure out exactly how many bunches of sage you should buy.

Custom Conversions for Bunch of Sage

General Information on How to Store Sage

Dried sage will usually be considerably more bitter than fresh sage. Considering that this spice is not really palatable fresh, adding it as soon as possible in the cooking process is a lot better than waiting for the end as in the case of most fresh herbs. 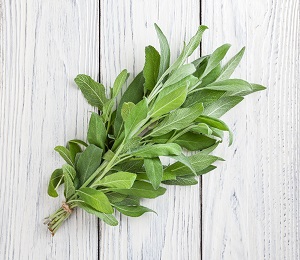 Sage is a very woody herb which is why you can store it using either the jar method or the towel method.

The jar method: When going for the jar method you will have to fill a water glass or jar with water only partially. You will then have to place the stem ends of the sage into the container right into the water, without washing the plants. Cover the jar of sage using a plastic bag and then store it in your refrigerator. As soon as you notice that the water starts to lose color or when a few days have passed, make sure you change the water. Using this method, you can store fresh sage for 2 weeks or more.

The paper towel method: This method involves wrapping the fresh sage in a paper towel that is slightly damp and then placing it in a plastic bag that is big enough so that the leaves aren’t crushed. You will then have to put the bagged sage in your refrigerator. This method will also help you store fresh sage for around 2 weeks.

Long-term sage storage basically involves freezing it. To do this,  discard the sage stems after removing the leaves. Get an ice tray and fill every cavity intended for ice cubes with sage leaves. Top everything off with water. Place the ice tray in the freezer for the next two days and then remove the sage cubes. You can transfer these cubes to a freezer Ziploc bag and then store them in the freezer for the next two months. Use them whenever you need them.