You might have come across recipes that call for a bunch of mint, two ounces of mint, or even half a cup of chopped mint leaves, but do you actually know how much mint will fit in an ounce, a cup, or a bunch? It might become pretty hard to cook something if you don’t know exactly how much of everything you need to add. As you might know, depending on the store you go in, the size of the mint bunches will differ and when you buy them from the market farmer’s market, each individual will wrap their mint bunch in whatever size they decide. This is why it will be pretty hard to decide how much mint you will actually use.

As we have done for other items as well, we took it on ourselves to figure out exactly how much mint would be in a bunch and what each store considers a bunch of mint to be. Based on our tests, we have noticed that the average bunch from the grocery store contains about 80 mint springs and weighs about 3.2 ounches.

We then went ahead and got the most average bunch of mint we could find and started doing our tests, to figure out exactly how many bunches you would need to get a specific amount of chopped mint leaves. We found out that you’d get about 10 to 11 tablespoons or somewhere around 2/3 cup of chopped mint leaves from a bunch. Each bunch will also contain around 2 cups of mint leaves that are loosely packed. Furthermore, we were able to see that each one cup of chopped mint contains about 23 to 25 springs and a weight of about 1.6 ounces of mint.

So it should be clear by now that a bunch of mint contains somewhere around 3.2 ounces of mint.  If you’re growing your own mint you can always use a home scale to find the exact weight, while when buying from the store, you can use the scale they have there. If you have a hard time converting bunches of mint to cups or other measurements, then you can always use the converter you can find below, which will make everything a lot easier.

How to Store Mint Bunches

Although mint is really tough to mix with a lot of foods due to its very strong flavor, there are some that work well with it, especially desserts and sweets. 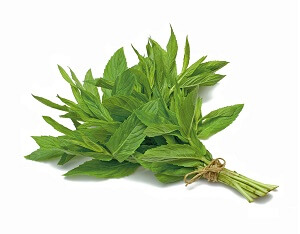 There are two very popular methods that are currently used to store mint: the paper towel mehod and the jar method.

The paper towel method is this: You will have o wrap the fresh mint in a paper towel that is just slightly damp and then put it in a plastic bag which is large enough so you don’t crush the leaves. The bagged mint will then have to be placed in the refrigerator where it should keep fresh for the next two weeks.

The jar method is this: first off, fill a water glass or a jar with water just partially. Then, just take the stem ends of unwashed mint and place them in the container, into the water. Cover the jar of mint loosely with a plastic bag and then store it in the refrigerator. When you notice that the water is starting to discolor, just change it. This usually happens after several days. When stored in this manner, is not uncommon for fresh mint to last 2 weeks or even longer.

If you want to freeze it, discard the mint stems and then remove the leaves. Try to fill the ice cube tray with mint leaves, each ice cube cavity getting a leaf of its own, then top it off with water completely. You will then have to put it in the freezer and keep it for two days before removing the mint cubes and moving them into a freezer Ziploc bag. The Ziploc bag can then be stored in the freezer for the next two months and used at will.