There are actual picking cucumbers, which are grown to be specifically uniform to their shorter length and husky width, even though all cucumber varieties can be pickled if you use a combination of spices, vinegar, and sugar. These cucumbers made specifically for pickling will be between 1½” and 4″ long when they are sold. They are usually less bitter than regular cucumbers of other varieties with spotted, spiny, and light green unwaxed skin. Furthermore, they will be able to absorb the pickling brine a lot better due to their drier flesh. Pickling cucumbers get grades by the ratio between length and diameter, as well as straightness, firmness, and color of the skin.

You should try to pickle your cucumbers as soon as you pick them, to make sure you get them to the highest quality possible. You should also know that if you plan to make dills you should use the longer 3 to 4 inches cucumbers, while when going for gherkins, you should use the smaller ones, of 1½ inches in length. On the other hand, if you want to make bread-and-butter style pickles or relishes, go for more mature and odd-shaped varieties. 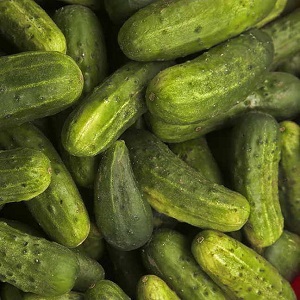 That 1 pound of fresh pickling cucumbers we used as a sample measured about ½ inches in length and translated into about 1 pint of canned sweet gherkins. We also tried to make a quant of canned dill pickles using other cucumbers that were 1 ½ to 2 pounds in weight, fresh, and 3 to 4 inches long.

You might also like our articles on how much do green beans, green onions, or shredded cabbage heads weigh.

One interesting thing you can do (that a lot of people have already tried) when you have a lot of pickling cucumbers that you need to wash, is to just throw them in the washing machine and set it on a gentle program without adding any soap. Among the best-known pickling cucumbers is the Gherkins variety, although there are a lot of other varieties out there.

So just by reading this article up to this point, you should know exactly how many pickling cucumbers you’ll need to make sweet or dill pickles, and how many will actually fit in a jar. If this isn’t enough and you need a way to figure out other quantities and measurements, then you can always use the conversion tool we provide below.

Most pickling cucumbers will be sous vided in Mason Jars and as soon as they cool off, they will be placed in the refrigerator, where they can last for 2 months or so.

If you want to store your homemade pickled cucumbers for even more than two months, then the best thing you can do is to can them.