You can usually use eggs in one of the next three ways when using them as ingredients in recipes: either egg yolks, egg whites, or whole eggs. The size of the egg will be just one of the factors that will ultimately influence the volume of the egg. Although most recipes call for either large or medium size eggs, we went for the normal eggs that you find in most grocery stores for our research, as these are the ones people will usually buy. So let’s answer this question: what is the volume of an egg?

We first needed to find out how much yolk would an average to large egg hold and how much egg white would the same egg have. Having this information would make it a lot easier to figure out the total volume of that particular egg. It might come as a surprise but, you will usually get 2 tablespoons of egg white and anywhere between 1 and 1.25 tablespoons of egg yolk in your average egg. This means that a whole egg, including the shell, would be around 3 tablespoons in volume. For the same egg, its egg white would weigh around 1 ounce/30 grams, while the yolk sat at about .6 ounce/18 grams.

Some recipes will call for a number of cups of eggs. So how many eggs will fit in a cup? The answer is pretty simple. An average cup will hold about 4 large whole eggs. You will also be able to fill a cup with just the yolks if you add around 13 egg yolks. As for the egg whites, around 8 egg whites should be enough to fill a cup.

Interesting fact: There is a connection between what food will the hen eat and the color of her yolks. Also, the breed of the hen will be responsible for the shell color and not the nutritional value or the quality of the egg. The eggs from a hen will become larger and larger as she grows and in general, one hen will be able to lay around 250 to 300 eggs each year.

You should also know that you can check whether an egg is hard-cooked or raw with ease: all you have to do is spin it and if it spins easily, then it is cooked. If it wobbles instead, then it is raw.

The information provided up to this point should make it easier for you to follow recipes that require the use of eggs and call for a particular volume of eggs or a number of egg cups. You can also use the converter we provide below for even easier egg measurements. To separate the eggs for recipes that call for this, you can also buy an egg separator.

General Information on How to Store an Egg

You should always store eggs in their original carton to prevent them from absorbing odors from other foods while in the refrigerator. 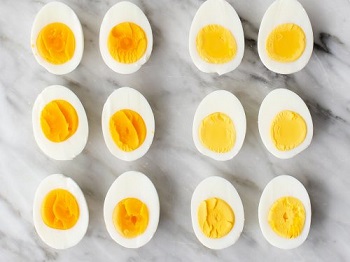 If you want to freeze the eggs, you can crack each one and beat it until it is blended then put the mixture from each egg into a separate muffin tin compartment and then freeze the tin. As soon as it is frozen, take the muffin tin out of the freezer, pop each of the muffin areas and place the hardened mixture in a plastic freezer bag. When it’s time to use the mixture, remove how much you need and thaw in the refrigerator.

If it seems more OK for you, you can even beat the eggs together and then place the mixture in an airtight plastic container and freeze all the eggs together. When it’s time to use frozen eggs you will use around 2 tablespoons of the blended mixture to have the same volume as for one large egg.

You should always eat the eggs within a maximum of 1 week since you purchased them. Eggs in general will keep for around 5 weeks before they lose their functional properties and nutrients but you can’t really know how long has passed since they were made, so it’s always better to check them for freshness before eating or adding them to recipes.
You might also like our articles about corn, celery, or sweet potatoes.

Eggs aren’t only eaten whole as part of a healthy breakfast. They are vital in a lot of recipes because they help with ingredient binding, act as an emulsifier and thicken the food.

Don’t pick the eggs based on their shell color, as this has no impact on the actual amount of nutrients, quality of flavor of the egg. The color is determined in full by the breed of the chicken.