As we always do with these tests, we went right ahead and tried to determine how much is a pound of shredded or cubed cheese with the help of a 1/4-pound block of cheese. When it comes to cheese, the same measurements will usually apply for all of the different types, including jack, Swiss, American, mozzarella, or cheddar.

The most basic weighing tests have shown that a 1/4 pounds block of cheese would be the same as around 2/3 cup of cubed cheese. This would translate into a 1 pound block being equal to 2.67 cups of cubes. When you grate it things are slightly different, in the sense that 1 cup of shredded cheese will be equal with the same 1/4 block of cheese, which means that 1 pound of cheese would be around 4 cups of shredded cheese.

Although bleu cheese is still the same weight, 1/4 pounds being equal to 1 cup, this type of cheese is usually crumbled, and not cubed or grated. Parmesan, on the other hand, is somewhat different than these other types of cheeses. This is because one full pound of Parmesan will be equal to about 4.5 cups when grated, which translates into 1 to 1.25 cups of grated Parmesan for every 1/4pound block.

A very interesting fact is that for each pound of cheese to be made, about 10 pounds of milk will be used. Most people only heard about cheese that came from either a cow or a goat, but did you know that milk coming from buffalos, horses, and even camels is used to make different types of cheese? Moose milk is also used, but the cheese that comes from this milk is very expensive and rare. It is only created on a farm in Sweeden and can be bought for around $400 per pound.

As for the most expensive type of cheese, it is called Pule, it costs about $600 per pound, and is made from a Balkan donkey milk variety that is only found in Serbia. You should always remove the cheese from the refrigerator around 1 to two hours before serving because it has the best flavor if eaten at room temperature.

This first part of the article should be enough for you to know exactly how much cheese you will get in a 1/4 pound chunk. If the information we provided still doesn’t seem to be enough, then use the conversion tool we offer below for custom measurements depending on the quantity you need. If you need to shred a lot of cheese, you should get a Microplane or a box grater.

General How to Store Cheese 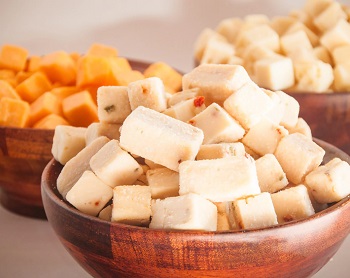 You will usually find cheese in one of the four types: hard, semi-hard, semi-soft, and soft. This designation is more about how much moisture is in the cheese, which will in turn affect its texture.

Some semi-hard types of cheese are Jarlsberg, gouda, provolone, and cheddar. Some popular types of hard cheeses are Gruyere, Swiss, asiago, romano, and Parmesan.

You should refrigerate the cheese for short-term storage. You can leave unopened packaged cheese in its original wrapping, but bulk cheese should be put in wax paper before being placed in the refrigerator. You will be able to keep cheese that is stored in this way for a maximum of 8 days.

In the case of aged cheeses like Manchego, asiago, Gruyere, Colby, and Cheddar, you can store them for a longer period of time in the fridge because they will just continue to age.

Never thaw frozen cheese on a countertop. Instead, always thaw it in a refrigerator.

You should wrap fresh, soft cheese like goat cheese or mozzarella tightly in plastic wrap and then place it inside a ziplock bag if you can’t keep it in its original packaging. You can expect soft cheese to keep fresh and retain all of its flavors for around 2 months if stored properly.

You won’t be able to properly freeze cheeses like Ricotta, Camembert, or Brie.

Most cheeses from the semi-soft category, like Gorgonzola, Havarti, Muenster, or Monterey Jack, will usually become crumbly when you freeze them.

You can freeze cream cheese for up to 3 months, but its texture and taste will usually be affected in time.