It happens very often for people to start working around a complicated recipe and end up at some point not knowing how much of an ingredient or another to purchase. In the case of blueberries, you’ll have some recipes calling for a certain weight, say for example 5 ounces, and other recipes that would require a quantity of blueberries in volume (for example a cup or two).

But how do you convert these numbers to make sure you’ll be using exactly the amount required in the recipe? And in the end, how many blueberries are actually in a pound? As we already did for other ingredients as well, to figure out these numbers, we did the heavy lifting and did the necessary experiments to know exactly how many blueberries your recipe will have you buy.

Blueberries will usually be served either chopped or whole, like most types of berries that you will usually use in recipes. They can be made into elaborate desserts, pies, and preserves, or they can be eaten raw and whole like a healthy treat.

We started off, of course, by going to the local farmer’s market and checking out the fruit section to know exactly how many blueberries will fit in a cup. As you might expect, the volume will usually depend on the size of the berries you buy. We used a pound of fresh blueberries for our measurements that we got from a local farmer and did all the necessary tests to answer these questions for you. Usually, you will notice an average diameter between 0.25 and 0.5 for berries.

Even though there are a lot of countries that can produce blueberries, North America actually produces most of the world’s production for these fruits (over 95%!). Among the most important states, Michigan is the top producer of cultivated blueberries, while Maine leads the top of wild berry producers.

Regardless of whether they are cultivated or wild, these fruits have something called a ‘bloom’, which is basically a fine, white powder that covers their dark navy-blue skin. You shouldn’t wash the bloom off these fruits until you are ready to eat them, because its job is to protect them and keep them fresh. Depending on when you pick them, unripe blueberries can still ripen, unlike raspberries, which will stop ripening after being picked.

The info we provided above should be enough for you to be confident regardless of the recipe you have in front of you. If you are still confused about conversions between different quantities and amounts, you can use our conversion tool and find out exactly how many blueberries you will need.

How to Freeze Blueberries

Freezing blueberries is pretty simple and straightforward: You will have to first spread them in a single layer on a rimmed baking sheet. Place them in the freezer for roughly two hours and then you can pack them for longer-term storage.

Should blueberries be washed before freezing? 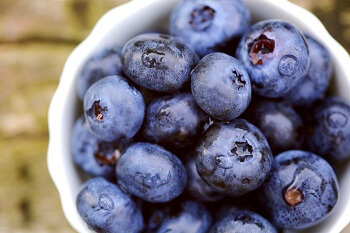 You might think that you have to wash the blueberries before putting them in the freezer, but if you do so, they will lose their ‘bloom’. This would leave them without the protective layer and they would become a target for pests and bacteria, while also losing some of their juiciness with time. What you could do instead is to simply freeze the blueberries with their bloom on and then wash them before eating or using them in your recipes.

What are the best containers to store frozen blueberries in?

A good container in which to store frozen blueberries should reduce most of their exposure to freezing air which would reduce the chances of freezer burn. An airtight container like a freezer bag should do the trick and preserve the freshness of the blueberries.

How long can you freeze blueberries?

After they’ve been frozen, you can usually store blueberries for up to six months without any issues. Most of the time they will still be good to eat after 10 months. A good idea is to make a simple label for the container with the frozen blueberries so you know exactly when they were placed in the freezer.

How should I defrost frozen blueberries?

To make sure you’re not losing any juices you should empty the berries in a bowl. You can use them immediately if you’re planning on making a smoothie. Just give them a quick rinse and you’re good to go. If you plan to use them in a more complex recipe, just let them sit at room temperature for no more than an hour. Once they reach room temperature they should be soft and perfect for muffins, pancakes, pies, or any other desserts.